Dentist is offering kids cash for their Halloween candy 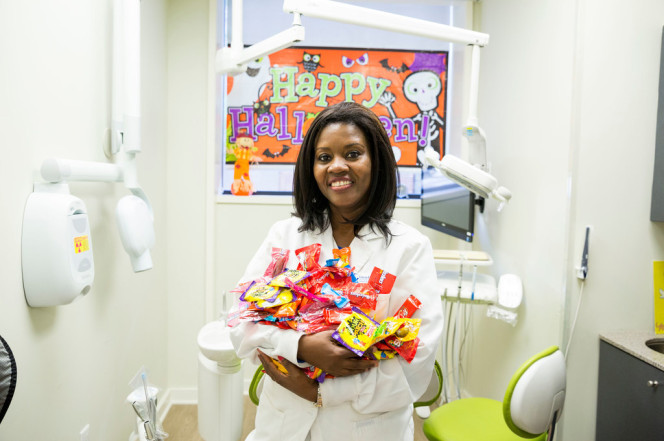 Dentist is offering kids cash for their Halloween candy

This Halloween, kids are experiencing the sweets smell of success.

Days after trick-or- treating in Hoboken is over, children can cash in at Lucas Dental, on Bloomfield Street, as part of their Candy Buy-Back program.

There, Dr. Robin Lucas trades each kid five bucks and a toothbrush for every five pounds of candy they bring in. “We don’t weigh it, we just hold it up in the air and say, ‘This seems like five pounds,’” Lucas told The Post. And their sugary hauls aren’t just tossed out — they go to a good cause: troops deployed overseas and on local bases.

Lucas, a cosmetic and restorative dentist who’s been practicing in Hoboken for 17 years, became inspired when her kids told her about a similar program. “They came home from school five years ago and showed me a flyer,” she said. “Someone else had already been collecting candy and sending it to different branches of the service.”

When Lucas Dental opened a pediatric component two years ago, she remembered the ingenious trick. Dr. Anuja Ranjitkar Sikder, a pediatric dentist joined a year later and became an instant fan of Candy Buy-Back. “We’re now aware of the impact of too much candy has on teeth and overall health. It’s a great contribution to the community,” said Sikder.

Lucas said they’ve donated 30-50 pounds of candy since the first Candy Buy-Back. At the beginning, a patient with military connections helped them reach out to different branches. This year, they’re hoping to work with the Air Force for the first time.

Not every kid is willing to have their confections confiscated, though. Most who come in are pre-K to 2nd grade. “Younger children are more easily controlled by their parents, and this is the group we want to reach,” Lucas said. “Older kids aren’t so fast to give up their candy.”

This year, the team began spreading the word in September with “tons of flyers” posted in their offices. No patient leaves without one.

“It’s a win-win- win situation,” she says. “The parents win, the kids win and our troops win.”

No comments to show.